Every object has its own law like us human. In STEM class, we learned about Newton’s law of motion which includes First, Second and Third law of Newton. Newton’s First law of motion is also known as the law of  Inertia. Inertia is a tendency of an object to resist a change in its motion. For example, when you suddenly stop the car. The car will stop, but your body stills keep moving forward. Newton’s Second law is focusing on the factors which are acceleration and Net force.  Newton’s Third law force that reacts in pair when hitting each other. Other than that, we learned about Fluid Force which is focusing on pressure. To learn more about the pressure of fluids, we do an experiment of the egg into the bottle. We burned to create smoke and put it into the bottle and it creates heat so when we put the egg on the bottle, the pressure will pull the egg in. After that, we need to get the egg out of the bottle so we blow into the bottle. Once it contains full of air so the pressure inside will help the egg to come out of the bottle. People may think it is luck, but behind it is full of science.

One Reply to “Human Have Their Laws so For Objects”

Liger Leadership Academy students are English Language Learners. They have been immersed in English since arriving at Liger, We pride ourselves on prioritizing process over product. Please excuse any English errors as part of the learning continuum our students have taken over the years. 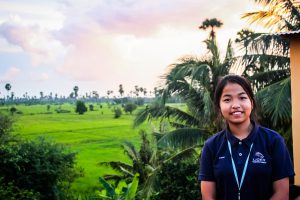 Hello! My name Kuychan and I am 15 years old. I am a middle school student at Liger Leadership Academy and I’m from Battambang, Cambodia. I love to do things I’m passionate about, but also challenging myself with things I never done. Different things can defines me, but the only thing I need is “Encouragement”. Hobby make me become a great photographer, but to future I’ll be a successful woman to create the change to place I born. Science come to life define what is the truth, but culture is always in here with me wherever I go. I grow to be a Change Agent.